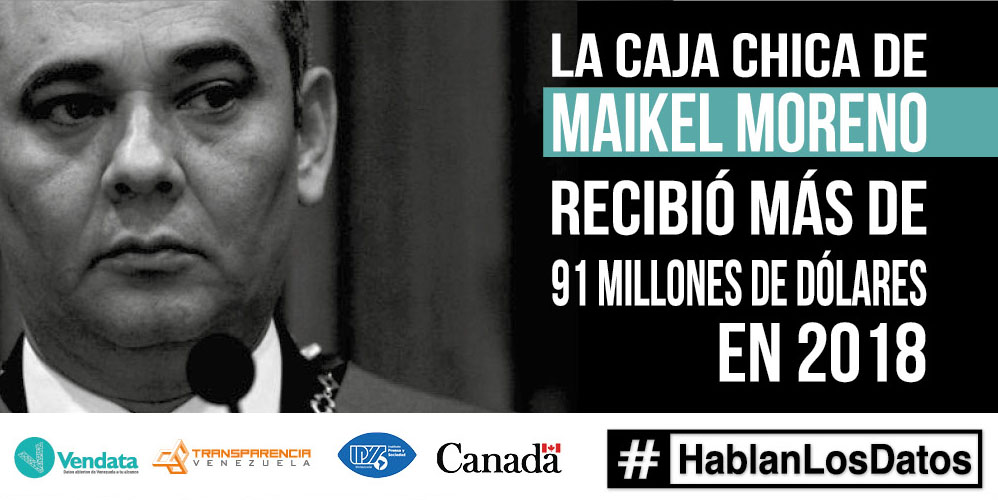 During 2018, the Forensic Gazette Foundation of the Supreme Court of Justice (TSJ) received, through six additional credits, 2.908.918.973,7 sovereign bolivars, which is equivalent to more than 91 million dollars at the official rate according to the Foreign Exchange System of Complementary Floating Market Exchange Rate (Dicom).

The Forensic Gazette Foundation was created in 1982 as the publishing house of the TSJ. His role had been that of editing, publishing, distributing and commercializing books, magazines, brochures, newspapers, agendas, calendars and any other informative means of academic research in socio-legal matters. Also that of institutional promotion and the digitization of the rulings, agreements, resolutions and sentences issued by the bodies that make up the Judiciary.

However, in Official Gazette number 41.338 of February 8, 2018, a new function was added, that of "coordinating with the TSJ, as the governing body of the Judiciary, and with public and private, national and foreign actors, operations in matters of health, food, housing, recreation, transportation and other social benefits that affect the good life of the workers of the Judiciary and their environment”.

This gazette also states that the foundation, in addition to expanding its area of ​​action would be under the direct supervision of the Presidency of the governing body of the Judiciary and not under the direction of the 32 magistrates that make up the Plenary Chamber.

In this case, the highest authority is Maikel José Moreno Pérez, President of the Supreme Court of Justice and President of the Criminal Cassation Chamber, who can establish the policies of the foundation, supervise the fulfillment of objectives, establish remunerations and bonuses, and basically manage the entity as its petty cash.

It should be noted that this decision was made ten months before its publication in the gazette, on May 17, 2017.

The Forensic Gaceta Foundation received six additional credits during the year 2018, of which five were to "cover budgetary requirements, where expenses of active, retired and retired personnel of the bodies and entities of the National Public Administration stand out, as well as to the pensioners of the Venezuelan Social Security Institute (IVSS) in their different contingencies”.

However, the additional credit approved in June 2018 to "guarantee the necessary conditions for compliance with the constitutional functions assigned to that governing body of the Judiciary" was the one with the highest value. At that time, 5 trillion bolívares fuertes were approved, which was equivalent, at the Dicom exchange rate of the date (Bs. 80.000), to a little more than 71 million dollars.

The review of more than 300 official gazettes, belonging to 2018, as part of the collaborative open data project Vendata led by the Press and Society Institute of Venezuela (IPYS Venezuela) and Transparencia Venezuela, confirmed how Maikel Moreno's petty cash has been growing.

En VendataWe did not have access to the initial budget of the decentralized entities for 2018, so we do not know how much money the Forensic Gaceta Foundation managed in its entirety. Only information on additional credits is available.

Already in 2017, the organization Transparencia Venezuela published in the note titled Government granted the TSJ more than Bs. 100 billion to be spent in 45 days that  Gaceta Forensic Foundation managed 14,45% of the total resources of the TSJ during that year.

They also cited a substitute magistrate, who asked to remain anonymous: “Many things have been done in recent years through this foundation, in addition to being the TSJ documentation center. That figure was used to give aid for funeral or medical expenses to officials in trouble and for anything else that managers can think of, thus deviating from its original purpose and mission. Now, through it, the bags of food received by the workers and retirees of the TSJ are paid for”.

When conversing with workers of the judicial entity, this statement could be reaffirmed. And although many employees were grateful to Moreno with the vouchers and bags of food delivered in December 2018, everything indicates that he only had to reach out to reach his petty cash box in the form of a foundation.